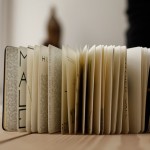 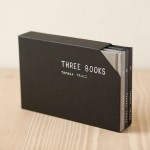 When my daughter was born my filmmaking came to an abrupt and (for me) surprising stop. I was unable to combine the intensity of motherhood with the concentration and long hours of film. From the beginning this was difficult. It wasn’t a difficult decision. I wanted to be with and care for my baby. I loved her and I loved the work, with its many and surprising challenges. But I found it frustrating not making something- something of my own. I took up knitting, but it didn’t quite stop the gap.

When my daughter was one, and I was pregnant again, my husband turned forty. I decided to make him a book as a present. It’s a private and personal thing, and I made it in my few hours of childcare, and at odd moments when Riva was sleeping. I did it at home and in cafés, keeping the book and a pencil case in my bag. I loved it, and I realised that I could make things after all.

All I had made before that birthday present book was a short piece of text that I wrote about Riva- my love of her and my overwhelming fear of losing her, mixed up with my obsession with storytelling. I liked that text a lot, even though I had the sense that it wasn’t quite complete. On Riva’s first birthday I sent it off to Granta. It was a symbolic gesture and I was unsurprised when it was duly rejected.

Having made the book for James though, I saw a way to finish that text, making it into a book, an unfolding physical object whose visual form was as much a part of the piece as the words. Shortly after I started I saw there would be two more books, each based on writing I had done long before. One was a fragment written for a class at The California Institute for the Arts and the other was something I’d been playing with since I was seventeen. I wanted to reach backwards, through time and memory, history and family history, to explore the roots of anxiety and loss.

I began work just after my son’s birth. When Riva was looked after once a week, Constantin would sleep in a Moses basket on the floor of the studio while I worked. I finished the books just after his fourth birthday. There were long periods of time when I only managed to work a few hours a week. Six months into my third and final pregnancy, I found the difficult content of the last book, which deals with the holocaust, too disturbing and work stopped completely for nine months.

After finishing the books I spent six months trying to find either a publisher or agent with no success. Even publishers who liked the book didn’t want to take it on- most people didn’t even want to see it and they absolutely didn’t want to see me. I decided to publish the books myself, a process that has been so delightful that I would now like to thank each and every person who turned me down.

Now the books are complete the new challenge is to get them seen, read, thought about and even sold…

To look at today’s pages click here.
To buy the books visit my shop.